I was totally outdone about not having told you about my son’s pool incident. In addition to this, I was trying to locate Matthew. Then something came over me. I needed to meet that officer that saw it necessary to perform CPR on The Kid one last time. Where was I going to find him?

My son told me a while ago, ALL POLICE OFFICERS have a Facebook account. With the newspaper clipping in my hand, I typed in Officer Todd’s full name. The next few seconds consumed several reactions. These included tears, smiling and shock (my son may actually be right).   Scrolling through what I believed to be his page, I didn’t know what exactly I was looking for. We had never laid eyes on each other and maybe he had moved to another location. Then I caught a glimpse and recognized the Belleville location. This had to be him. Most of the posts on his page were with regard to law enforcement and fallen officers. I asked #80 if he’d like to go with me to meet him. His reply- YES with a smile. After I composed myself, I set out to send him a message. I composed the note the night before and pushed the send button the next day from my desk. 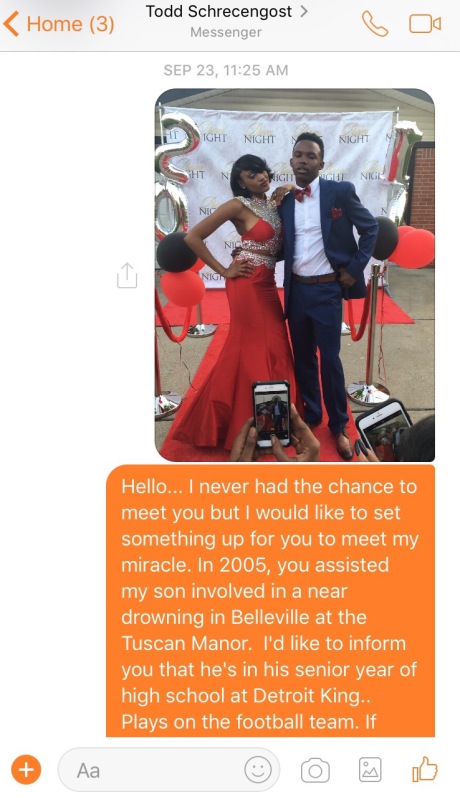 As you can read, he had been thinking of us as well. I knew he would be proud to know about that little boy he saved that day. Over the next couple weeks, our schedules in the Wilson household prevented an opportunity to make the meeting. Between the football, practice, school, and travel, we were both being pulled in all directions. I’m confident we’ll make this happen in the coming days.

Happiness is what I felt most by being able to make contact with him. Happiness because I’m proud to present to him a young man with no criminal record, on task to go to college and respectable. A kid that still doesn’t believe all of this happened to him but knows he owes his gratitude to the many individuals that helped him that Ill-fated day. And with all the news and media reports about bad policing, I know for a fact there are some good officers serving the communities across this land. Officer T. Schrecengost is our hero. Now, if I could track down Matthew, I’ll include them both on everything happening in the coming months of The Kid’s life.