I’m sure many of you have heard of the crisis of the Detroit Public School system.  If not, catch up on part of the story.  As a parent of a current student, I was trying to find out what I could do to help.  This lead me to meet up with several people and resources to gain more information.  I was always concerned – I learned where to go for assistance.

During the reporting of the crisis,  DPS opened their ears to the parents at several town hall meetings.  It was in these meetings that we were given information about the current state of the system, what it meant for the students and what we could do to help.  The school system set up several committees to address common concerns of the parents. These included Nutrition, Safety, Facilities, Customer Service, Supplies, Curriculum and other.  These were composed to address the complaints/concerns efficiently.  Those town hall meetings were brutal. Not because there was no order but because there was a lack parent participation.  There were parents there that knew all the ends and outs of the school system over the last 20 years.  I felt so far behind and out of the loop.  Moreover, I was determined to learn more and become active.

This lead me to the MLK PTSA meeting.  This was an experience for me. In a school that boasted some of the most successful students in Detroit, the parents were missing from this meeting as well.  It was here that I learned, my son’s school has a surplus of 400 students, has the highest man population in the state and that’s including the all boys institutions and they are trying to maintain during these difficult times.  The part that disturbed me the most about this meeting was the lack of parent participants.  Not more that six months before – I sat in this room with the parents of the football team and it was packed.  Have we systematically placed our children in one or two boxes? Sports or education.  Here is a recent meeting we had with the football team. Notice the change in attendance. I literally had to stand up after turning down a seat offer. The place was packed. 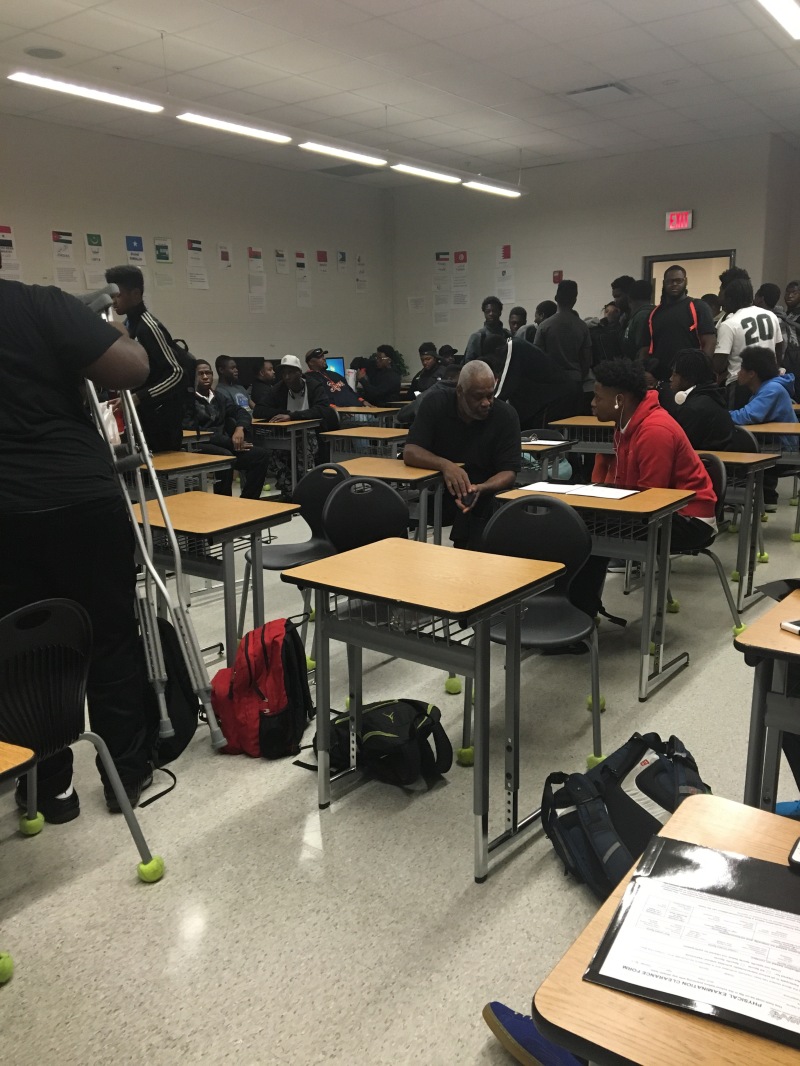 On April 14th, Detroit Public Schools Office of Parent and Community Engagement held a one day seminar and I was eager to attend.  Not to mention, I was the chair for the Customer Service Committee.  I had to be there to learn more, engage the parents and be supportive in their efforts.  Here we met the new interim superintendent, Alycia Meriweather.  I took several sessions during the day while linking up with several other parents of high school age students.  This was a very good exercise and I learned a great deal.  It felt like things were going to be moving in the right direction.  I had a good feeling about the steps they were taking. 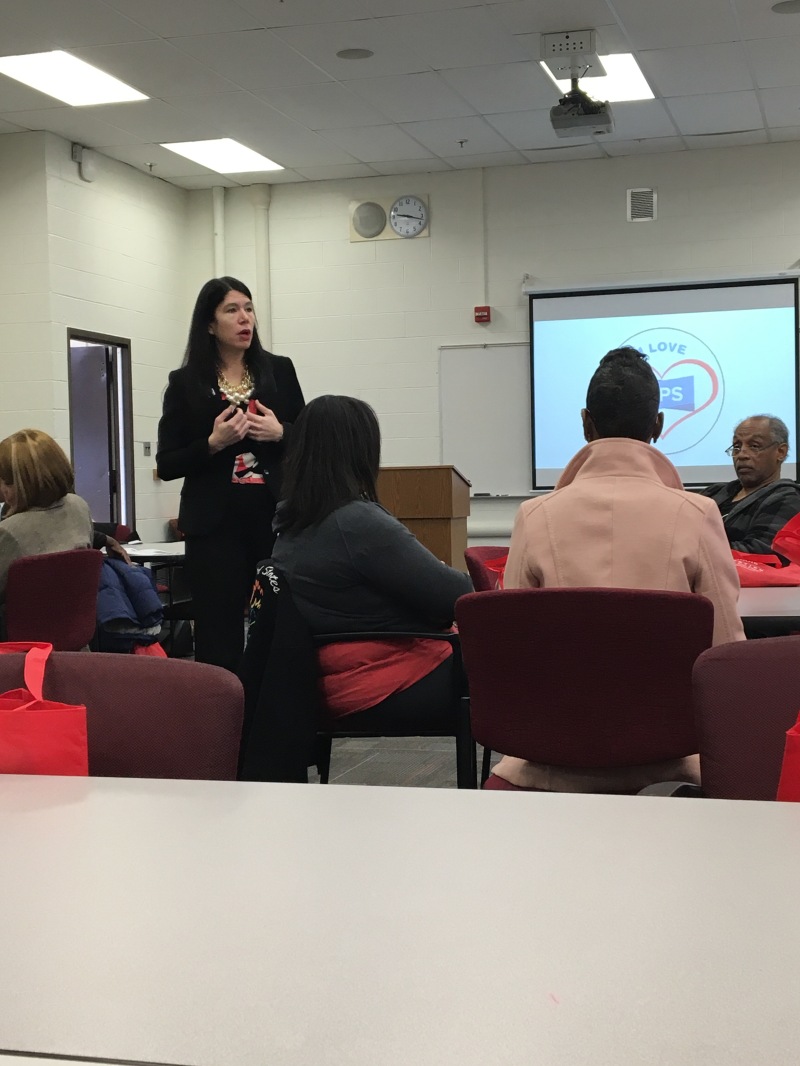 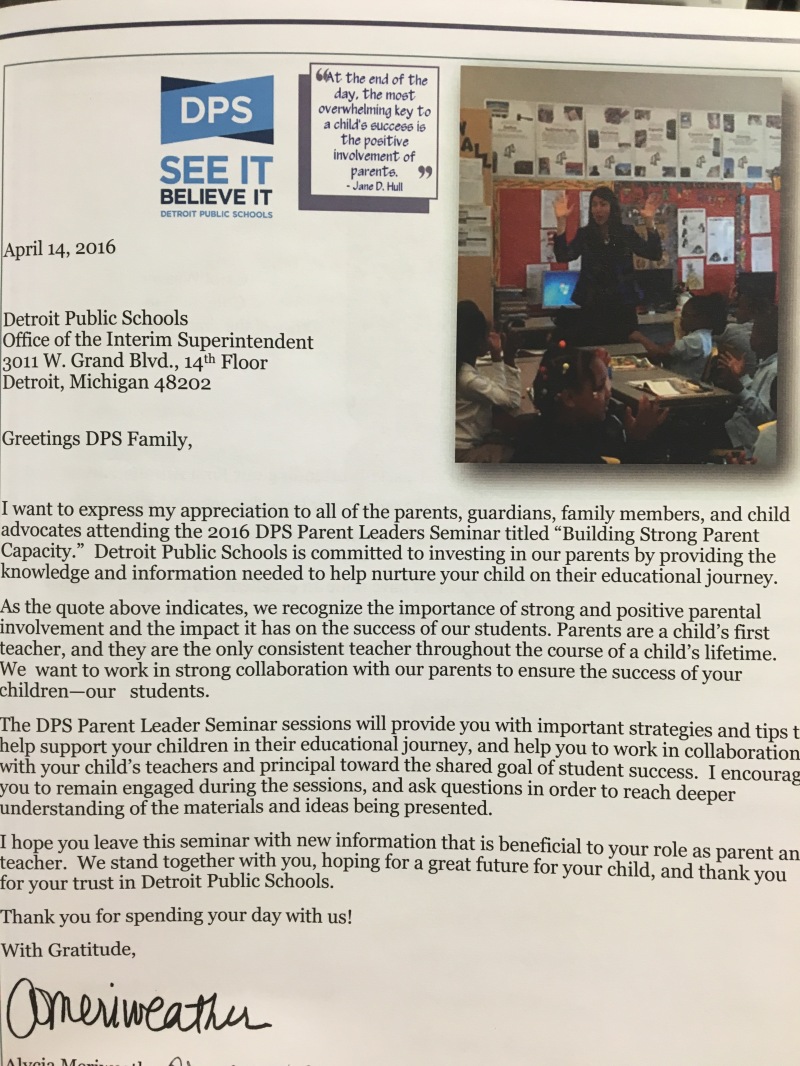 In the following days, there was more disturbing info coming out.  The teachers were on the verge of a strike after being told they would not be getting paid as agreed upon in their contracts.  “Working for Free!”  No way – we were back on the sick outs and who could blame them.  The teachers, parents and students were rallying for the right thing to be done to help this struggling district.  After 2 days, students returned to the classrooms with hopes of finishing the school year and looking forward to the summer vacation.

I’ve said my piece about DPS.  They have done a disservice to some of the students and failed the community.  A very valuable take away from the seminar was “trying to regain the trust of parents.”  This is the cornerstone of this districts revitalization.  I don’t trust them but I’m willing to fight for what is rightfully all childrens – a sufficient education, no matter where the call home.  I heart DPS because I am a product, these teachers are the soul of the city (they have not abandoned us) and the system will have to get better to draw more families and individuals into the city boundaries.  This fight won’t be over in the next 15 months – but I’m dedicated to the idea of fighting for the education of all Detroit children.