I think you all remember when I thought coming back to this Eight Mile Road was joyous. Trust me it was until the kid started going to school downtown. 😦 Doing my job as a parent to transport him to and from school through all this hellish weather was a beast. This past winter was one of the worst and the snail crawl to Lafayette from the northern perimeter of the city was killing my rest and wallet. During the school year, I made a decision to move close to school and work. The resignation letter I submitted to the city had to be rescinded, due to my child wanting to stay at this specific high school. I bit the bullet and my tongue for his happiness. Keeping the thought in mind that this time will pass by quickly.

After hunting around during the last several weeks of the school year. I found exactly what I needed and prepared my family to move one final time before I became an empty nester. The place was spacious allowing us to maintain our privacy and function as a household. The thing I dreaded most was about to happen again. I needed to move all of my shit to another place. I had spent a good portion of this spring getting rid of stuff and giving stuff away. It still seemed as if I hadn’t made a dent. A stop at a Uhaul packing location empowered me with 20 boxes, tape & a mattress cover to take this thing head on. This will go down as one of the smartest investments in this decision.

I had already been planning and buying things I needed for the place over my time here. Now it just seemed that I had too much but I knew once everything was in its place I’d be fine. One day while #19 was away I went to his room and gathered everything in a few boxes and closed them with the tape. He literally was dragging his feet with this small piece of business. I, on the other hand, was exhausted with the idea and the time I knew it would take for me to get comfortable. Then there was leasing office staff, which left nothing to be unexpected in the future. (That’s all I’m going to say about that.) I was going to make the most out of it until it was time to move on to the next chapter in my life.

Moving day came and the movers were late, it was a million degrees and I was over it! 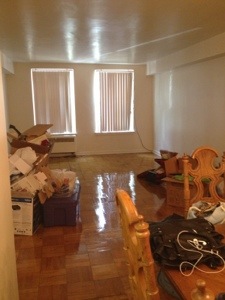