In my traveling hay day the tshirt was my favorite souvenir. You get a tshirt, you get a tshirt, you get a tshirt… Everyone gets a tshirt!!! It’s the easy momento! However as my personal style blossomed and the garments swallowed me I found no use for them. Sure I had stashed a few in my hair care box to dry my hair with but there were still many to discard. My collection included wares from Jamaica, Mexico, Bahamas and many more. The one that meant the most to me was a tattered tee I purchased on my senior trip to Disney World. Mickey Mouse dressed in his Fantasia outfit and the number 98 on the front. It was my first visit to Magic Kingdom. Almost 20 years later I was still holding on to it.

In my anxiousness to de-clutter my life. I placed this special shirt in the bag for charity. Before I get the bag to the car it ripped and the 1st thing I saw was the mouse – Mickey that is. Transporting me to a time I remember like it was yesterday. I couldn’t get rid of this shirt. What was I going to do with it though. Becoming a hair turban was out. Sitting it to the side I vowed to figure out what I was going to do. I thought about framing it but I wasn’t that big of a fan.

One day while checking things out on YouTube, I discovered a tutorial on creating a workout shirt. All I needed was a tshirt and scissors. This was perfect but as much as I like fitness wear. I don’t want to spend too much cash on it. So I had to give this a shot.

Pretty straightforward instructions to achieve the look. Cut the neck, arms and bottom hem. Use the hem to create the racerback and you’re complete. Here are a few pictures of my attempt at salvaging a piece from my past. 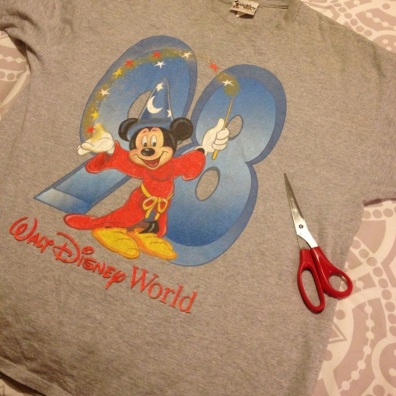 Cut off the sleeves 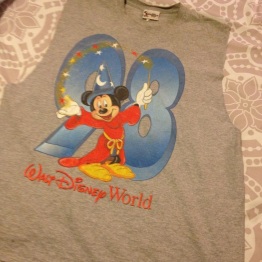 Cut off The Hem

It wasn’t a hard project. I want to show you pictures of the final product but I wore to the gym right after! You guys know I’ll show you at a later date but it was a real success.