It seemed as if the weather would never break over the past couple weeks. I’ve worn Springtime clothe on Monday and searched for my boots by Wednesday morning. The winter has definitely taken a toll on so many of us – causing us all to proclaim in unison, I’m just over it! Through my frustration I even donated a few coats to the needy. Everyone was saying just be patient, there’s nothing we can do but wait and Spring will be here in no time but I had my own agenda. I needed the weather to break for one reason and one reason only – Slow Roll Detroit. Yes, the time was here for my bike gang to take over the city for a few hours every week again for 6 months. After being couped up in the house all winter and missing the last two rides I was anxious to get back out in these streets to pedal my Schwinn.

Sunday, March 30, 2014 in Detroit, Michigan at 11:30 am the beginning of the Slow Roll season was initiated. Dressed in my vintage Red Wings jacket and Chucks, I smiled as we ventured into the city from the Eastern Market. Accompanying me on the inaugural roll was my ace and sister Shawn dapper in her Detroit Jacket. The temperature was cooperative at 48 degrees. In true Slow Roll style people from all walks of life and regions in the metro Detroit area came out to roll. While riding I received several compliments and offers for the jacket I was wearing. Something instantly told me I had something to hold on to and it had an unreal value to me. I just said ‘Thank you” and continued on my way. (We’ll visit this jacket later on.) There were pictures being snapped, cars honking, corkers encouraging, strangers laughing and waving admirers along the way. 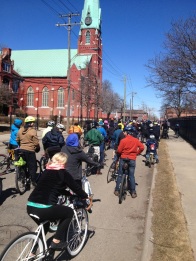 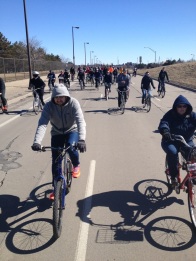 The most interesting part of the ride was the dodging of potholes, crates and road hazards all left by the fearless winter. The random hole informative that we use to warn riders behind us was more repetitive and warranted greater emphasis. At times, we stopped to go around a large hole. We saw a few people lose the battle against the potholes and destroy their transportation. In my most careful manner I managed to keep my bicycle from being listed in critical condition due to external causes. Event though the route was rough, we enjoyed our experience. Upon returning to Shed 2 of the Eastern Market for the after party and food, we were informed of our return to our regular schedule of Monday 6:30 pm meet and 7:00 pm rides. We parked are bikes and left them unattended as we journeyed to the food trucks waiting to serve us. As I stood in line for the Mac Shack and Shawn in the El Guapo the people drank talked and enjoyed themselves in the afternoon sun. I talked on the phone to my guy and told him the crazy tale about the offers for the jacket. True to the core he instructed me NOT to sell his jacket. I had no intention of parting with it. My order of Macaroni Cheese Balls with marinara was ready and I went over to see what was taking my sister so long. As soon as I get over to the food truck she’s waiting to be serviced from this guy emerges and offers $125 cash for the very jacket I’ve just been instructed NOT to sell. Hearing the explanation to why I can’t he gives up and asks for a picture of it for reference – I decline and walk away to eat my food. Turns out the dish I order is divine and my Slow Roll season opener is a success. 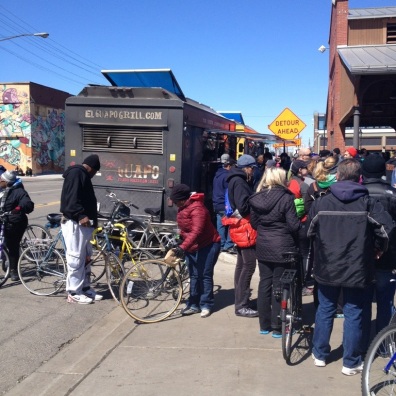 Spring could not have shown up at a better time. My excitement was felt through burning thighs and sleepy eyes when I returned home yesterday afternoon. Let me not forget to mention my new schedule at work which will afford me to roll slow with my people all season long. To some people it seems like complete craziness and that’s fine. Yes, we venture into some of the most undesirable areas. Yes, we’re not riding for any other cause other than unity and fitness. Yes, we ride through the streets of Detroit after dark. All of these things display the deep seeded desire to come together and love for the place we’re most often times associated with Detroit. For me it’s very simple – for up to 2 hours every week I don’t think about anything other than staying with the group and viewing my city on 2 wheels instead of flying by behind the one. This is a little peace I became familiar with experiencing while riding my bike with strangers has been restored to me through this event.

Smile and grab a bike and join me!